Colin Woodland of England has created a wonderful gadget for the guitar that opens up all sorts of possibilities for beginners and experienced guitarists alike. And the things it can do for songwriters…

Ah, I’m getting ahead of myself. “Woodies G Band” is steel spring coated with bonded silicon rubber. It is shaped in such a matter that it clamps onto one of the outer strings (either the high or low E ) and holds the note at whatever particular fret you place it on while you play. Think of it as having an extra finger or thumb that plays the same note while the rest of your hand goes on its merry way up and down the fretboard.

For instance, let’s place the Woodies G Band on the third fret of the low E (sixth) string and see what we can do. Since I now have the low G note playing whenever I strike that string, it’s possible for me to play higher voicings of the G chord while still using an alternating bass line (now open E (which is a G note) and open D) like this:

For finger style guitarists, and especially for those who like to dabble in open and alternate tunings, the patterns that one can come up with are limited only by your imagination. Woodies G-Band is one of those products that helps you to explore more of what your guitar is capable of doing. It also helps you learn more about theory. Really. For someone like myself, who is totally enamored of sustained tones, this product is dangerously addictive. Take a typical chord progression like Em – D – C – B7 and then use the G-Band to sustain the B note on the seventh fret of the high E (first) string: 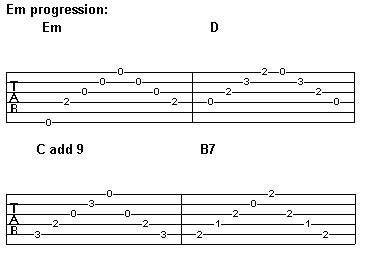 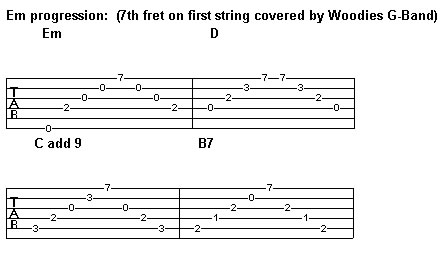 This makes for a very beautiful fingerpicking pattern that would be otherwise impossible to do on a single guitar.

Colin and his partners have also come up with “Woodies G-Band II” which covers two strings (on the same fret, naturally). This is really great for alternating basslines where the root is on the fifth string or for creating droning chords to use in all kinds of playing. Putting a G-Band II on the seventh fret of the fifth and sixth strings (giving you an E and B in the bass) essentially puts your guitar in Em7 open tuning and paves the way for you to play all sorts of interesting voicings.

And then there’s always using the two together or in conjunction with a capo! As I’ve said, for someone like myself who likes to play around with chord voicing and finger picking patterns, it is incredibly easy to sit down with one or both of these devices and then look up to see that an entire afternoon (or day!) has somehow passed by! I could seriously sit here and write out the different ideas I came up with during the first day I had the thing and I would be at my computer for the better part of the month.

The folks at Woodies – Colin, Mike Tulloch (production) and Jim Tait (sales and marketing) – have understandably received favourable Reviews for his invention from various guitar magazines. One thing that those Reviews fail to mention, though, is what a great teaching tool this would be for children. Often children are taught what we call “partial” chords because their hands are not big enough to form full chords on the fingerboard. Well, if you used a G-Band II on third fret of the fifth and sixth strings, covering the C and G respectively) you could transform those partial chords into chords with a bass note and start to introduce the concept of the bass notes much earlier in the child’s education. Performing an alternating bassline on the G and C chords becomes something that anyone who can fret one string can do.

In short, this is a fun little gadget. If you really enjoy exploring your guitar rather than simply just following along in a book – then I would highly recommend you checking out more about Woodies G-Band and Woodies G-Band II. You can read more about it and order them directly from Colin at his website: http://www.woodiesgband.co.uk/

He’s very good about communicating directly with his customers and answering questions concerning his product. Please feel free to him that you read about the Woodies G-Band here at guitarnoise.com.

Since joining Guitar Noise in 1999, David has written over a thousand articles, lessons, interviews and reviews here. He also serves as the site's Managing Editor, supervising all content in addition to the continued writing of his own lessons and articles. And if that wasn't enough to keep him busy, David is also the author of seven instructional books, the most recent being Idiot’s Guide: Guitar Theory.